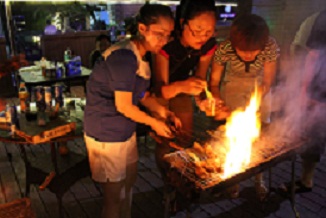 Oceanpayment organized a leisure activity on July 12, 2014
It’s a wonderful Saturday! With blue sky and gentle breeze, all staffs of Oceanpayment are going to Mirs Bay, which is a bay between Hong Kong and mainland China.
After taking a group picture in front of our company, we get on the bus and start our trip. Along with the bus’s advance, we play games, sing songs and enjoy the scenery during the two hours’ ride.
Our bus stops in the Silver Beach to take a 30 minutes break. Excitedly, girls taking off shoes, running towards the beautiful beach, enjoying the spectacular view of the gulf and the skyline.
Then we having lunch and arrive at the Mirs Bay at three p.m. Our men staffs move off the goods and fruits from the bus and carry them into the home stay, where we’ll spend a night there. After having an hour’s rest, all of us come to the beach with balloons, rope, whistle, etc. Dividing into two groups, which named H and Q, choosing a judge, we begin to play tug-of-war. Both of the two groups’ members are posing well with their bodies leaning back, hands clenching the rope, eyes gazing at their opponent, waiting for the whistling. At the judge’s whistle, everyone is pulling back. Faces distorted, tooth clenching, the two sides both spare no efforts. After several minutes’ stalemate, group H plays a hard ball and wins this round in a second.
Suddenly, all the members of group H begin to cheer, faces smiling, sweats dripping. Well, the second round is coming. Those who just lose the last round are ready to fight back, adjusting their posture, rearranging their tactic, waiting for the whistling. And group H is also poised and ready for the next fight. “Beeping!” Round two, starts. Surprisingly, group Q beat their opponent just in a minute. And in the third round, they beat group H again and becomes the winner. What an exciting game! However, the group who lose it will have to blow the balloons, which are for the later BBQ party. Gosh! Two hundred balloons remain blowing!
The twilight darker into night, our BBQ party are on the go. Drumsticks, corn on the cobs, sausages, eggplants, oysters, etc. All these foods are awaiting roast. The smell of the roasting drumsticks heightens every body’s appetite. Quickly, all of us are full and cannot eat any more. Is this the ending of our party? No. We sing songs, enjoying beer, dancing…
One day’s trip is almost over, having breakfast, then we get on the bus and back home.After this activity, the staffs of Oceanpayment become familiar with each other and share the same spirit of happy working and happy living.