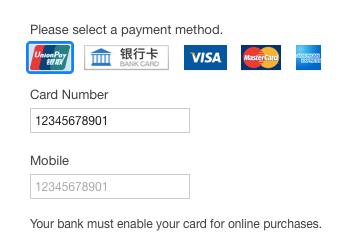 Apple has has added UnionPay as a payment option for its App Store customers in China, Apple’s second largest market for app downloads.

Customers can now link their Apple ID with a UnionPay debit or credit card for one-tap purchases. Previously, Apple relied on a top-up system for its app store in China.

Government-backed China Unionpay has a virtual monopoly on yuan-dominated payments in China. Government regulations mean that all ATMs and Chinese merchants have to use UnionPay to process payments in renminbi, as well as with foreign credit card companies. To date, the total number of UnionPay Cards issued has exceeded 4.5 billion, and its network extends to all cities and rural parts of China.

“The ability to buy apps and make purchases using UnionPay cards has been one of the most requested features from our customers in China,” said Eddy Cue, Apple’s senior vice president of Internet Software and Services.

China is Apple’s most important growth market. This deal between Apple and UnionPay follows hints of a possible payments partnership between Apple and Alibaba’s online payments arm Alipay. One possible scenario is for Alibaba’s financial affiliate to provide back-end services for Apple’s Apple Pay payment system.

But Alipay is not yet available for Apple services, including the app store. While Alipay is China’s largest online payment system and is keen to keen to broaden its online-to-offline business as well, the physical retail market is still overwhelmingly dominated by UnionPay. China’s largest payment processor has been slow to open up to Apple, but this new partnership could provide another way for Apple Pay to access the Chinese payments market.（From： Paymenteye）